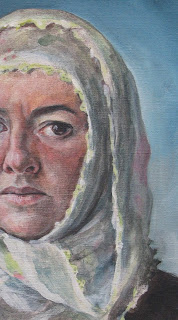 Took down my show yesterday at 440 Gallery. Bittersweet exhaustion. For over a year (many years actually) have been downsizing and attempting various forms of retrieving and distilling the past while simultaneously living in the present and planning a future. Distilling is a good word: creating some intoxicating elixir from harvested acres of grain and fat fruit.  The exhibit was a revelation even to me.  Seeing 20 years of transformation in one room.  A few highlights: A wonderful review in Pintamanuel . Having my sisters Tomi and Teresa here harmonizing on songs we used to sing. My daughter Frances and a talented new friend, Alex Sheets reading from journals. A slide show featuring the history of art according to my life. A grand benefit party with Spoke the Hub for the Consolation Center in Haiti.   An evening of short films curated by Sarah Greenleaf. A full month of wonders and lots of wine and hummus.

I will now indulge my reminiscing ego and post images from the show.
First my slide curtain.  Boxes and boxes and boxes of these square wafers of old documentation.  I had to explain to some young visitors not only what exactly slides mean to an artist of a certain age but also what slides are in general. 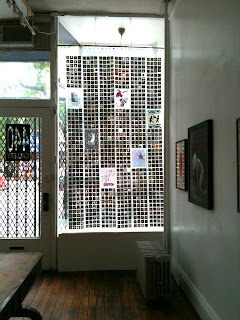 So these, I explained, are small photographic transparencies that you put in a machine called a "projector" that projects them with light onto a screen. They can become huge with this projection.  This is the way we used to document our work. We used to have to make several copies, some for our own records and others to send out to galleries and schools or to apply for grants and residencies.  There are over a thousand in this curtain and all of them relate to my art.  They are mostly photographs of work I have done but there are also a few images of my influences and some photos of people whose portraits I painted or sketched.  There are images of studies that have never been exhibited and there are images from residencies: studio scenes, scenery or gatherings at lunch.  I provided a few magnifying glasses so people could see the work up close. I also had a slide show, using my vintage Kodak Carousel slide projector, showing early work and influences.  The Carousel projector was a big part of my professional and personal life.  Every family reunion featured "The Slide Show" of past reunions.  It was a communal album viewing.  More recently it was featured in an episode of Mad Men.  The large transparencies are cells from a shadow theater piece I created and performed with a fantastic crew in Ankara Turkey for SanArt '92: "Golgeli Oyunu" This is the image we printed on the t-shirts we sold and also on the cassettes with the soundtrack (remember cassettes?). 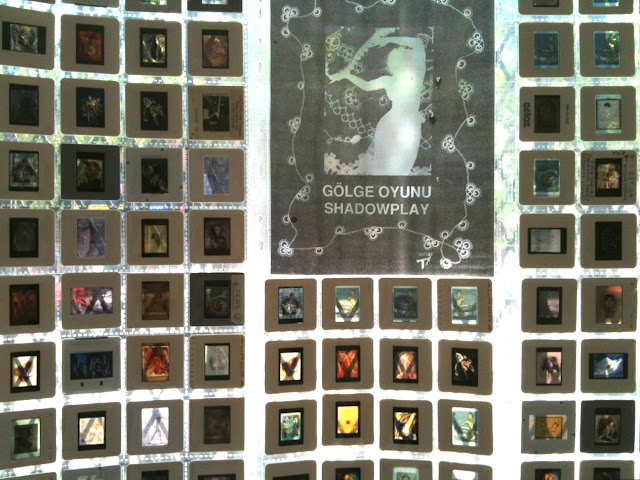 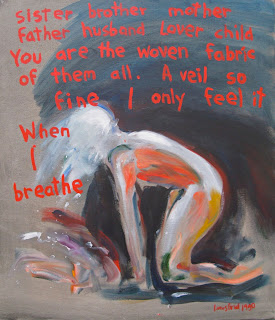 One side of the gallery was installed with early work, some from the 90's,  exhibited in Turkey where I lived at the time. This painting is one of a triptych and was sold during the show to an old friend who I hadn't seen in several years... an appropriate exchange for a show called "memoir".  It was painted at a time when I poured my guts on a canvas.  I wanted the words in red to signal blood or lipstick.

I placed a large antique desk in the middle of the gallery with the intention of working everyday on my actual memoir.  I had begun a graphic novel a few years back and realized the drawings were taking so much longer than the words.  I just wanted to write down a lot of things before I forgot the details, and so that is what I am doing now, trying to finish this accounting of my first 25 years.  Here is an image of the desk with the bust of "The Portuguese" one of my early ventures in sculpture about 10 years ago.  I had a small crystal ball on the desk, an orb of real quartz crystal that held reflections of past, present and future. 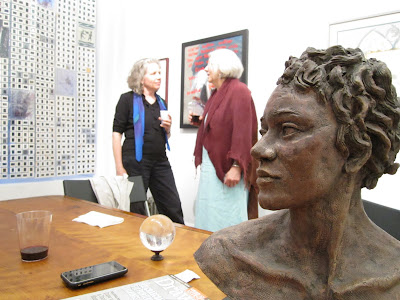 And so, finally, from the more recent past, I included some small masks and a terracotta tile wall hanging that I did last year in Vallauris. This residency was for ceramic artists and an opportunity for me to explore the medium.  I had never done glazes before and so made something of a sampler, trying out various glazing techniques. The seven small masks "Homage to Vallauris"  were portraits of people I saw in the village there.

My most recent piece was a circular painting I began a few years ago and worked on, off and on.  It is a lot of detailed painting and drawing and I become a bit daffy if I work too long a stretch on all the gnarly little details.  I call it "Face Time" and it is in the tumbling block quilt pattern with each diamond shaped facet filled with an eye or a mouth or some detail of a face.  The faces are of people who have come into the gallery or pictures of friends and family, some from old sepia photographs of ancestors.    I took advantage of the circle canvas and painted the images at various angles so there is no "right way" to hang it.  I shifted it's orientation throughout the run of the show.  I originally wanted to mount it on a clock mechanism to rotate slowly, one cycle over 24 hours.  It would be a very subtle clock.  Since it didn't sell at the show, I may still do that. It was very interesting for me to see the change in my work from a voluptuous expressive style to the more recent (the last five years or so) geometric order.  It is the tight wire tension between order and chaos that that I have been balancing on for most of my life. Order seems to be ascending but it's funny, like the old yin yang gang at the ok corral, there is absolute chaos at the heart of order and a kind of calm order in the center of chaos. 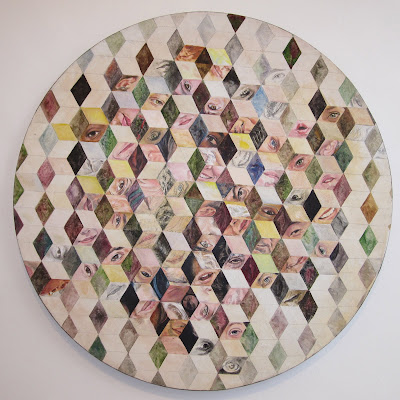 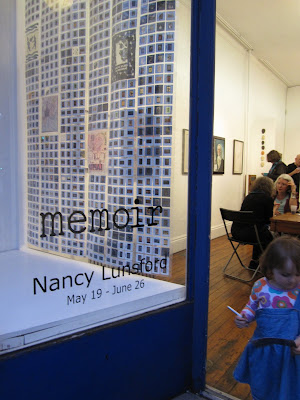