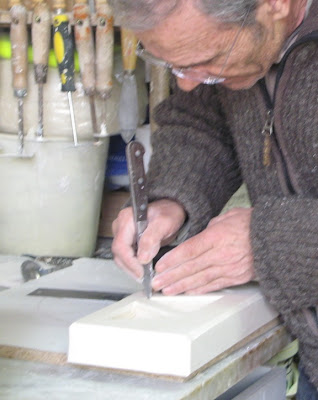 March 1, 2010
Picked up my molds today and later took Jason by the mold maker in the afternoon.  Jason brought his bike and everyday gives a report of his tours through the villages and the countryside  He has been studying French in preparation for his residency here and usually returns with a story to tell.  In his own work he makes references to the local environment, incorporating imagery relating to local lore.  His excursions have been information gathering expeditions.  He photographs the scenery and tries to glean information regarding stories, legends and folklore. He is working on a cicada in the studio after seeing ceramic cicadas in several of the pottery stores.  He spoke with Eric, a potter whose studio we pass on the way to the Vallauris atelier who told him that cicadas bring luck.  Erik also related the fable we know as the ant and the grasshopper, although here the cicada is in the grasshoppe'sr role. Jason has a small carving of a cicada he wants to mold and then cast several .  The modeleur, Martial Quere,  is a pleasant chatty guy, top of the line, best mold maker in France he says as he gestures to a certificate framed above his work bench.  Dale Dorosh, the man who runs the artists' residency, later confirms that he is indeed an excellent mold maker.  He is lively and we all practice our language skills, using gesture, sketches and humor. 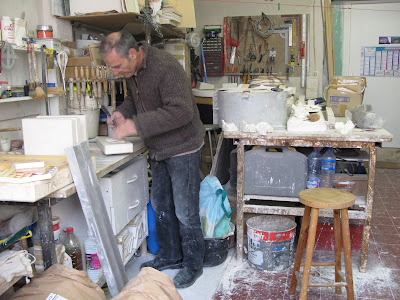