Arrived in Istanbul a week ago and the time has been thick, full of visions and art and friends and no time to transfer all the blah blah blah to Bloggonia.  I will only touch on a few things here. It is a magnificent city but with three times the traffic and with a forest of new high rise buildings since I was last here seven years ago  The traffic, apart from the superhighways, is arteriosclerotic in the older hilly neighborhoods. There is a mass transit system and they are building more subways but every time a shovel is plunged into the earth anywhere in Turkey, they strike yet another, older civilization and the project is slowed as archaeologists salvage and carbon date... they've recently uncovered a settlement 12 centuries old. 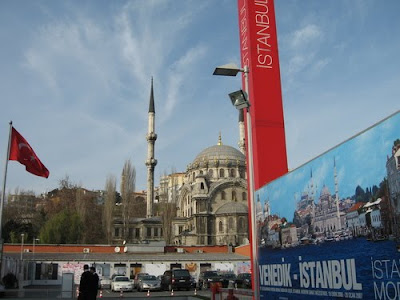 Went to Istanbul Modern  at the edge of the Bosphorus. This relatively new museum in a vast redesigned warehouse along the Bosphorus  is situated behind  the weathered grandeur of Nusretiye Cami.  Their juxtaposition is an apt signifier of  the seductive charms of this ancient yet startlingly modern city.  I was not allowed to take photographs in the museum but assumed I could gather  ample documentation from the internet.  Unfortunately I was unable to find a lot of work I saw.  The museum's website was spare as far as images go and some of the artists' websites, if they had them at all were difficult to navigate.  I found images  on auction and sales sites, but these were not the ones from the exhibit. Ekrem Yalcindag, the artist whose work i saw in Germany, had a huge multi colored installation on a vast wall of the special exhibition "From Tradition to Contemporary". 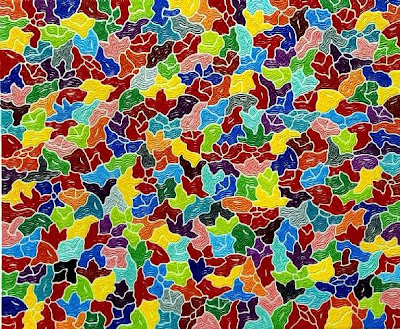 The Turkish art scene is in general heavy on discourse. There is ample exposition of ideas yet inadequate images to illustrate the the concepts discussed.  There are artists sites with paragraphs of text and no images.  I find discourse to be a vital or at least stimulating part of a deep understanding of art but I like the option to bypass it for a direct visual experience of the subject at hand.  In this environment my impulse seems a guilty superficial  indulgence. One could deepen the overheated discourse with a further discussion of whether the intellectual framework of all this discussion serves to illuminate or alienate the viewer and the resulting the socio-political ramifications, elitism vs. populist sentiment... and so it goes, blah blah blah.  Yes, I am shallow: I want to SEE pictures, and not always TALK about them.  One artist, easily accessible online and with a great amply illustrated website is  Inci Eviner. 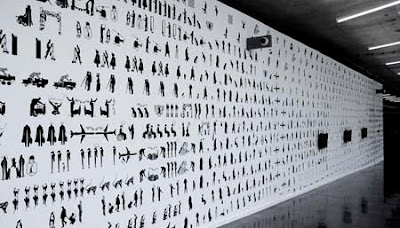 She too had a vast wall installation of shadow like images reminiscent of Kara Walker,  although here the discourse is  illuminating:  Eviner is in the same club as Walker but her sources include the ancient local tradition of golgeli oyunu, shadow theater.  Evinir's wall of silhouettes was punctuated with videos of traditional images altered with sometimes hilarious variations. 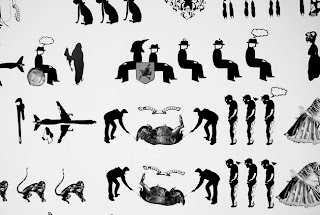 Selma Gurbuz, whose large images also reference shadow theater, also has a calligraphic aspect that echoes older cultural idioms.  i couldn't find an online image of the particular piece in the Istanbul Modern but this is similar.  In general, women are well represented in this and many other exhibitions in Istanbul.

Ergin Inan is an artist I am familiar with from my time in Turkey twenty years ago.  He was then part of a huge exhibition of modern Turkish art held in a large government space. I was writing a column for the Turkish Daily News at the time and I was especially taken with his work since, unlike most of the artists in that particular show, he successfully merged a specific Turkish  or traditional identity within the contemporary idiom.  Before my piece went to press, the large painting/collage I was writing about  was removed from the show because some Islamic fundamentalists felt it was disrespectful.  He had used pages of a religious text as a collage element.  There were protests by artists and others against the removal of his piece and I submitted the article anyway with a description of the work.  So I was pleased to see his work here but I could not find that particular masterpiece on line. 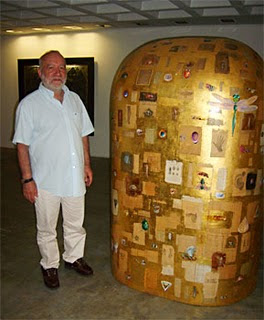 I found an image of the artist standing next to a domed sculpture that was in the show. The shape references the inscribed monoliths from many cultures, including early Ottoman funerary monuments but also  the sculptures at Mount Nemrut in southeastern Turkey.  Ergin Inan is also known for his exquisite drawings of insects that he includes in a lot of his work.
Posted by Intensia at 12:17 PM