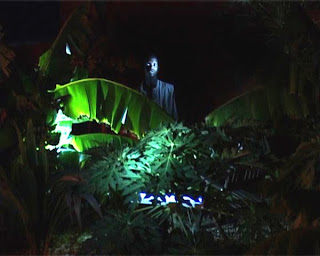 February 11
Laura Padgett introduced me to Kai Middendorff   last night and suggested I go to the Finissage or closing party at his eponymous gallery tonight.  Well, I just showered and put on make-up and decided not to go.  It's cold and snow on the ground. I've watched people from the balcony walking tentatively over the icey sidewalk. It's dark, I'm not sure of the terrain and since falling on the ice last year and shattering my wrist, I am terrified of slipping and falling.  There is a metal plate in my wrist and I am still paying for the operation. I have a nice salad and pasta from yesterday in the fridge.  I will have a lovely dinner here and do something artistic to appease the art gods for neglecting the public sacrament of "support for fellow artists".  So forgive me Neil Beloufa, I was so looking forward to meeting you and seeing your work. Perhaps another time.  Here is his image of a figure in tropical foliage reproduced on his card.  He is a young (25 for chrissakes) French Algerian with a pretty impressive CV. He's shown in New York, London. Paris and all over, been in a lot of film festivals. 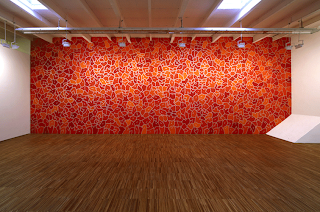 Actually, there is another artist represented by Kai Middendorff  whose work also fascinates me.  He is a Turkish artist Ekrem Yalcindag.  Kai mentioned him when I met him last night and on the website I see why.  His vast wall painting "Red" is amazing. 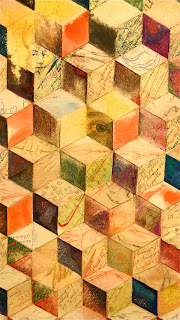 And so here I am, eating my salad in C & B's German kitchen.  With cherry tomatoes, lettuce and carrots from the Turkish market. 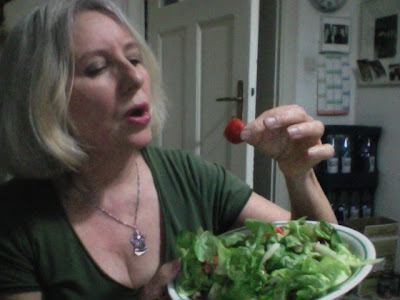