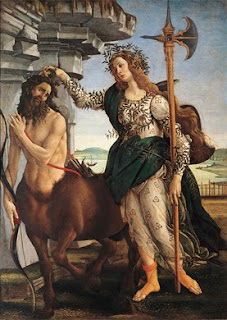 February 10 Frankfurt
Went to the Hauptbahnhof, the main train station, today to get a train ticket for Vallauris and decided instead to fly.  Fying is cheaper and the train is a 10 hour ordeal with no ability to check my luggage. A no brainer.   I am bringing some tools with me for clay and the tool box is tucked into a larger suitcase. A heavy load to drag around on a train with a transfer in Paris.


Frankfurt is a financial center in Europe and not particularly known for it's art scene but there are some great museums and galleries here if for no other reason than that it is a financial center.
This evening I went to see a Botticelli exhibit at the Staedel Museum .  Met my sisters friend, Laura Padgett  an artist who studied painting at Pratt but who is an accomplished photographer. 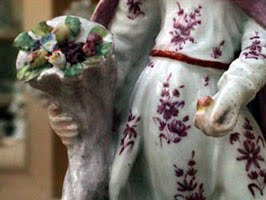 Laura Padgett "Porcelain from the V&A" 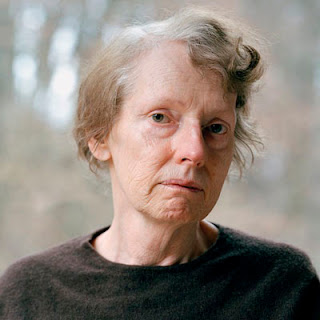 Laura took me  afterwards to an opening at another venue.  The show was titled "Transzendent" .  Of the three artists, Daniel Schumann interested me.  He had portrait photographs of patients in a hospice.  He photographed them over time as their health deteriorated and they approached death.  The work was quiet and gentle, the subjects were posed formally and although the theme was grim, there was gentleness and dignity.  The color palette was delicate, muted, many of the scenes suffused with light.  The Botticelli palette was still in my minds eye. 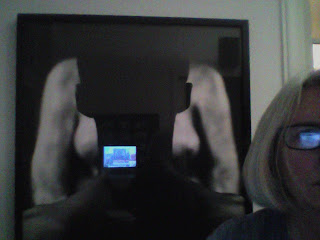 Now back in the apartment, a light supper and settling in for the night. Hope to finally get a normal night's sleep.  I am attaching images captured in photo booth on my computer of  the large black and white photographs here in C's dining room.  In the first, the computer screen is reflected in the glass (and in my eye glass) and the second, across the room from this photo, is a series of photos of two young boys playing or fighting a kind of capoeira. The artist is Miguel Rio Branco. 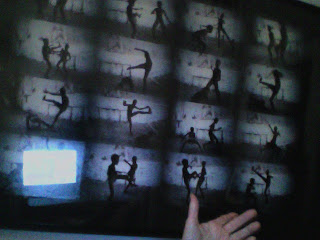 There is small Will McBride piece too high to photograph. Will McBride is an incredible photographer, painter and sculptor, an American based in Germany.  He has been working for years on on a huge installation of sculpture and paintings called "No War! Monument" 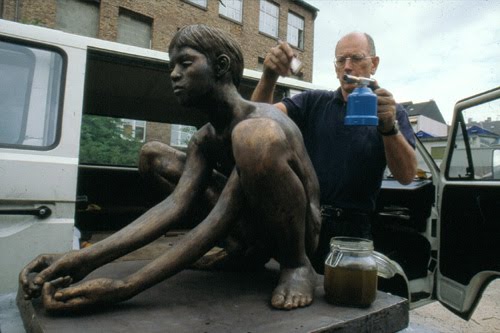 Will McBride putting on the patina for "Harry Dome"
Posted by Intensia at 6:33 PM